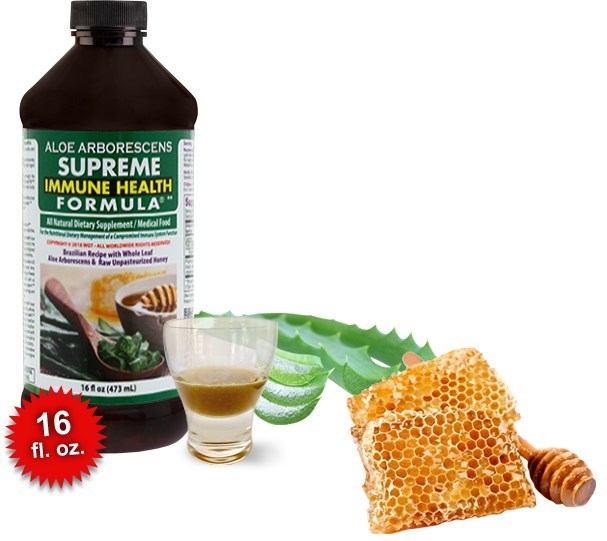 DALLAS, Feb. 11, 2020 /PRNewswire/ — While millions have long credited common aloe vera as having certain dermatological and other health benefits, a unique species may have elevated aloe to a whole new level.

It is known as the “Aloe arborescens” and has now been enthusiastically designated by researchers as, a Supreme Immune Health Juice Formula. Available only online at: www.ActivateImmuneCells.com

While some observers feel such optimism may be over-stated, others agree that the term, “stunning” is WELL-DESERVED. Why?

Because of four key factors:

The first, is of course, is its prime ingredient, organic mature aloe arborescens, which bolsters the body’s defenses at the cellular level, thereby stimulating and modulating the body’s own innate immune system.

They bolster the body’s defenses by stimulating the number and intensity of macrophage activity of white blood cells that seek out, ingest and destroy dysregulated aberrant renegade cells. PMID: 30895270

They protect bone marrow from damage by toxic chemicals and drugs.

The Fourth, Raw Unpasteurized Honey is the potent co-factor in the formula. It acts as a carrier agent for delivering the aloe medicinal properties to the remote parts of the body and is a natural preservative for protecting and preserving the active health promoting constituents in aloe.

Honey and its several components (like flavonoids and phenolics) are reported to mediate inhibition of dysregulated aberrant cell growth due to its regulation of cell cycles.  Research has shown raw honey contains the living form of an immune-boosting probiotic bacteria called Lactobacillus kunkeei which stimulates the cells’ immunity processes. PMID 24566317

But what are doctors saying about the Supreme Immune Health Juice Formula™?

One world famous oncologist at the St. Gerado Hospital in Milan, Italy, Dr. Paolo Lissoni, calls the formula “Absolutely astonishing”. In a clinical study he conducted with 240 test subjects with metastatic cancer half of which used the formula along with Chemo therapy the results verified the recipe inhibits the proliferation of errant cells … exhibits immune-stimulating and antioxidant effects … enhances survival time … and reduces toxicities, as proven by radiological evaluations.  PMID: 19368145

Patients with immunodeficiency who have been given test supplies of this organic immune health juice formula by their doctors, are now ordering large quantities for their long-term and continuous personal use.

According to Tom Waid, President/CEO of DecaAloe.com, “production laboratories are working day and night to respond to the growing demand for the Aloe Arborescens Supreme Immune Health Formula which is being made available online only, at special introductory prices.”

Doctors, Integrated Practitioners, Healthcare and Wellness Professionals, and members of the media may obtain a special free Scientific Wellness  e-Monograph: Organic Aloe and Natural Raw Honey as Nutraceuticals & Medical Foods. ($30.00 Value) at www.ActivateImmuneCells.com/FreeMonograph According to the 68 pages of research period this ‘Rare Brazilian Botanical Formula Can Help Improve Patient’s Wellness and Quality of Life.’