The Cancer Fallacy: Pay for Overpriced Drugs or Be Left for Dead

The Cancer Fallacy: Pay for Overpriced Drugs or Be Left for Dead

One of the many, but perhaps the most impactful medical use of Aloe Arborescens, is to help the fight against cancer. Helping people with cancer and other degenerative diseases was the main reason Father Romano Zago did his research and promoted the Aloe Arborescens formula. With that mindset, of helping those in their fight against this terrible disease, we highlight the financial trap created by traditional cancer treatments that many find themselves in when they receive the dreaded diagnosis.

Just last month an article was published in the Dallas Morning News, the area’s most prominent newspaper, about the increasingly out of control costs of cancer treatment. This article by Jim Landers, “Your money or your life: many cancer patients face painful choice”, is just one of many. A simple Google search of any phrase like “rising cost of cancer drugs” will pull up countless articles that detail how mainstream cancer treatments cost are out of control. The image below shows the monthly cost of cancer drugs introduced since 2012 range from just over $5,000 to upwards of $65,000. Don’t forget that is PER MONTH. So if you don’t have great medical insurance, cancer automatically becomes a financial death sentence.  With the billions of dollars being donated to cancer research each year, what reason do companies have to charge these astronomical prices?

Important Note: amounts have been adjusted for inflation to be reflected in 2015 dollars

That is an alarming trend. Remember, the chart has already been adjusted for inflation, so there really is no justifiable economic reason for this exponential price hike. The above-mentioned article goes on to talk about the very troubling fact that “oncologists get most of their money from reselling drugs to their patients.” Simple math tells you that “the higher the cost of the drug, the more money for the doctor.” But the buck doesn’t stop with the oncologist. Hospitals want to turn a profit as well. So don’t be surprised by the fact that “many hospitals can get big discounts on cancer drugs under Medicare rules. But they don’t have to pass those savings on to patients. So hospitals, too, profit from higher-priced drugs”.

Just in case you think all medical costs are following that same trend, the same article sites that “in 2014, the cost of prescription drugs jumped 13.1 percent, according to Express Scripts, a pharmaceutical benefits company. Specialty drugs, like cancer drugs and the hepatitis C treatments, increased 30.9 percent in 2014. Their prices are expected to go up another 44 percent this year.” Dr. Hagop Kantarjian, the chair of the leukemia department at Houston’s M.D. Anderson Cancer Center, said that the prices of new cancer drugs are “absolutely immoral.” 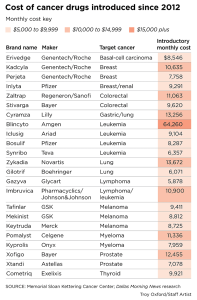 No Functioning Marketplace for Cancer Drugs

Though this problem is not unique to the United States, it is by far worse here than in other developed countries. The same source shows us that “about 1.6 million Americans will be diagnosed with cancer this year”, and add to it that the “annual spending for the average patient is already more than $20,000 higher in the U.S. than it is in Europe”. Dr. Hagop goes on to inform us that:

This is the mentality of the companies producing cancer treatment drugs.

Dr. Clifford Hudis, who is the former president of the American Society of Clinical Oncologists, was quoted as saying that “we don’t have a functioning marketplace as regards cancer and drugs. One result is everybody in this space is victimized” because “the automatic correcting effect of a marketplace isn’t there”.

There are much more evidence and details in the article, so we suggest reading it in its entirety. But for our purposes, we wanted to simply highlight some of the main issues with the cost of cancer treatments. This doesn’t even take into account that your odds of survival with these drugs are incredibly low, 2.1% on average. We’ll go into more detail on that in a later post. We hope that this information helps you to make informed decisions about your health care. Even if you do have health insurance that covers the astronomical cost of chemotherapy, we strongly suggest you try the Aloe formula as a treatment supplement. Many have had great success in using it to help get better results from the treatments and reduce the negative side effects.

Oh, and it won’t cost more than you montly mortgage or rent payment. Learn More about our subscription plans.