Learn more about the science behind Aloe Arborescens and its arsenal of natural compounds important and essential for maintaining healthy cellular function, such as phytonutrients and nutraceutical properties. Because of these medicinal properties, we use the entire leaf when making our formula.

THE BASIC SCIENCE BEHIND OUR ALOE FORMULA

All chronic disease stems from some type of toxicity, an inner pollution, and detoxification must first occur if a chronic disease is going to ever be reversed. It is this Systemic Detoxification that comprises the first foundation on which to rebuild vibrant health. Our Supreme Immune Health Formula consisting of a proprietary blend of liquid Aloe Arborescens juice provides gentle systemic detoxification of the whole body while at the same time providing vast amounts of nutritional support.

The purifying action of Aloe juice is due to several molecules. Aloin is an active principle exclusive to the Aloe plant and made up of anthraquinone glycosides. Its therapeutic effects are summed up as purging, detoxifying, and markedly antibiotic. Aloe-emodin is a molecule present in the yellow exudedmatter, rich in anthraquinones, found in the lining or under the cuticle of the Aloe leaf. It possesses bacteriocidal and laxative properties and can boast a marked anti-tumoral effect, especially in pre-cancerous and cancerous cells of ectodermic tissues. The complex sugar, acemannan, strengthens cell walls, so that the toxins created by metabolism and secondary reactions due to partially digested food can be properly eliminated from the body.

The second foundation on which to restore vibrant health is Immune Modulation. Once pollutants enter the body exposing it to toxicity of any type the immune system becomes compromised. In our formula the immune-modulating property in aloe is carried out by the glucomannans, a class of long-chained sugars derived from plants, which have demonstrated in clinical and laboratory studies to have a wide variety of protective and immunostimulating effects in the human body. Aloe Arborescens Miller contains the largest concentrations of acetylmannan, the most active form available existing in nature. The acemannan molecule, in particular, produces antiviral and immunomodulating effects that regulate immune defenses according to the body’s requirements. This mucopolysaccharide deals with the damaging processes of the body by acting as an immune stimulant, principally by stimulating the production of T lymphocytes and macrophages from the thymus and the beta cells of the pancreas. A substantial part of a person’s immune system lives in their gastrointestinal track, the gut, which is usually affected in some significant manner form toxicity. Digestive problems is a good example of immune system dysfunction. A common denominator in all the beneficial actions of acemannan is the ability to coat and permeate all the gastrointestinal surfaces, increasing the fluidity and the permeability of these membranes. In this way, it allows the easy expulsion of toxins and an even faster absorption of nutritive factors. This stops the immune system from intervening in internal digestive support, which could cause its compromise, and saves the immune defenses for where they may be really needed.

The Brazilian Supreme Immune Health Formula provides a remedy aimed at increasing or revitalizing a compromised immune defense system that comes from the active medicinal properties contained in Aloe Arborescens juice and, more precisely, acemannan. This polysaccharide has the extraordinary property of acting directly on the various cells that are in charge of immunological activity in the human body. This proprietary blended product has no equal in terms of the potency, purity and stabilization of the raw material of whole leaf Aloe Arborescens juice and raw, unheated, unpasteurized honey. 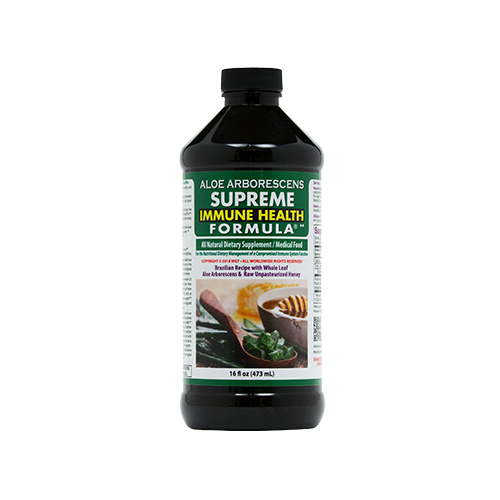 DISCOVER BETTER HEALTH FOR YOU AND YOUR FAMILY